While I was watching the Queen’s Gambit on Netflix, some questions came to my mind. What would happen if I make a chess engine play 1,000 matches against itself? Would the exact same game repeat over and over? If not, what would the win/lose distribution look like?

Chess engines are computer programs that analyze chess positions and provide a list of the strongest plays for those specific positions. These programs can be very strong and are regularly capable of beating the best human Grand Masters.

As for the win distribution part of my question, this article regarding the advantage of moving first in chess was interesting and informative. Let’s take a look at the following historical data: 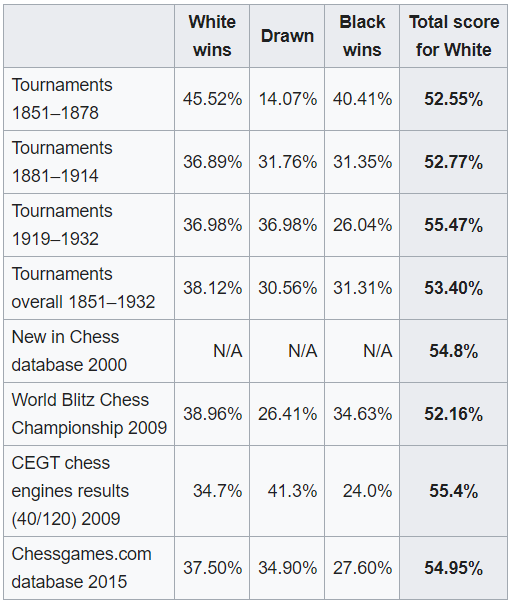 In chess, white plays first and, as you can see, the initiative advantage allows white to win between 6% and 10% more games than black. In case you are wondering how is the score calculated, it’s simple: wins award 1 point and draws award 0.5 points (there are some slight innacuracies due to rounding, but I wanted to present the original table).

In a chess engine vs chess engine scenario, I was expecting white to have advantage (it’s chess after all), but I was still curious because machines play differently, are not subject to fatigue, stress, etc. Specifically, I was wondering if I would see more draws for example. Besides that, I still wanted to see if the same game would repeat over an over (the strongest play should always be the strongest play, right?), so I decided to move forward and perform a little experiment.

For this simulation I used the Stockfish chess engine because it’s available on all platforms, well known and best of all, free and open source.

Python has some nice chess packages and after testing a few, I decided to go with python-chess. What I liked about it is that it can use Stockfish as a backend and it has all sort of convenience methods to evaluate the board state, such as detecting if there’s checkmate, if it’s impossible to win due to insufficient pieces, etc.

The complete source code is available, but I’ll explain some simplified highlights here.

Initializing Stockfish is quite easy:

The hash table is used to store evaluations/information for a position, so that evaluating it later is faster and more efficient. This value is in megabytes. From what I’ve read, the suggestion is to use half of your RAM.

And what about that Syzygy stuff? This parameter is related to what is known as endgame tablebases. In a nutshell, there are endgame board states which have been deeply analyzed and studied, and the optimal moves are already known. In this case, we are going to use such tables to optimize moves. In case you want to do something similar, keep in mind that the parameter fails silently, so it’s a good idea to setup logging to make sure the files have been loaded. You’ll see something like this in the log:

Endgame tablebases are expensive in storage terms so I can’t distribute them in the source code repository. The ones I used for the simulation are available here. I used “Syzygy 3-4-5 Individual Files” which almost a 1 GB download. The “3-4-5” part of the filename means that the tablebases include endings with 3, 4 and 5 pieces. If you have 48 GB to spare, you can use the 6 pieces one if you prefer. 😉

Stockfish has many other parameters that you can change, but the default values are ok.

The main simulation loop is also quite simple:

There are two important parameters in chess.engine.Limit:

Notice that board.result() returns “1-0” when white wins, “1/2-1/2” means draw and “0-1” when black win. However, it does not return what was the reason for a draw. I wanted to log matches, so there was a little bit of extra work to get that information.

As for the board, in the text representation, uppercase is for white pieces and lowercase for black pieces. However, it’s difficult to understand, so we can program some additional functionality in order to have a nice looking board. Python-chess can only output boards in SVG format, but we can use the svglib library to convert to PNG format. 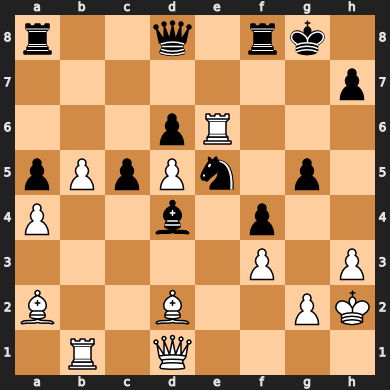 Running the simulation for first time

The first important thing I’ve noticed is that there was variety in how the games were played. In theory, given infinite time and the exact same conditions, the engine should always play the same moves. In practice, however, there are some reasons why this does not happen:

The other thing I noticed is that white always played “e2e4” as first move, so in order to make the simulation more interesting I decided to force the engine to use different first moves:

These moves have different levels of strength, being f2f3 one of the worst possible moves in chess.

An opening in chess is a sequence of moves that happen when the game starts. Some openings have been studied for centuries and there is very rich knowledge of which moves are better and why. Just like we did with the endgame files, we can also use opening books with Stockfish. The ones I used can be found here.

The following method receives the moves we defined ealier and if use_opening_book is set to True, it will traverse the opening book recommendations choosing always the first suggestion (which is the strongest).

There is no clear line between the opening and middlegame, so I decided to setup an arbitrary limit of 22 moves (11 moves for each player).

After playing 100 matches with each opening and depth=20, I had the following results. By the way, 20 is a little bit shallow, but unfortunately setting up a higher value made the simulation too slow on my machine. In any case, it’s what chess.com uses by default, so it’s definitely not bad.

Based on this small (and statiscally inconclusive) sample size, there are some interesing things to notice:

While I was doing research for this post, I found the results of the Stockfish test suite.

In most cases, the tests setup a board position and test for a specific behaviour, so we can’t use these results for comparison purposes, but I was quite surprised by the testing infrastructure.

In case you want to volunteer your computer to run tests, here are the instructions.

This little experiment made me remember when I used to play chess as a child and in general, automating Stockfish is really easy with Python. Depending on what you want to do, the main problem might be time and hardware, because using deeper analysis is both time consuming and very CPU intensive.

PS: Just for completeness, these are the moves the opening book suggested: